Ancient Pistoia is a modern city. It has all the conveniences that you would want. Almost everyone has a car, but a taxi is as quick and as cheap as a Uber. Buses are clean, ever cheaper than taxis, of course, and run a regular schedule. You can shop at glittering boutiques, discounted clothing stores or wait until Wednesday or Saturday morning and shop at the outdoor market where you can find anything you could ever need, and if not, they will find it for you.

You cannot possibly find a bad meal in Pistoia. No matter if you choose a small take-out stand, a trattoria with only a few tables, or a more formal restaurant, I dare you to find a meal that is not tasty and fresh authentic Tuscan cuisine. And you are welcome to sit there undisturbed as long as you want.

Pistoia has a fair number of tourists, but so far I only see tour groups of Italians. Maybe that’s because Pistoia was declared the 2017 Cultural Capital of Italy. That was quite an honor for Pistoia to be picked over every other city in Italy. I almost never hear any language other than Italian.

I feel safe here, day and night. I am careful with my purse, but I’ve never had reason yet to be nervous about pickpockets. The worst that I can say is Pistoia has quite a few refugees trying to sell some small Kleenex packets as a cover for asking for money. But they are not rude or obnoxiously persistent. According to one Nigerian refugee I spoke to, Italians don’t give jobs to refugees unless they speak good Italian, and even then, there aren’t many jobs available. As an ESL teacher of many refugees, my heart goes out to them and I do give them a little money. I sat in the Piazza Della Sala for a cappuccino during the Saturday morning market, and saw several others giving them money as well. 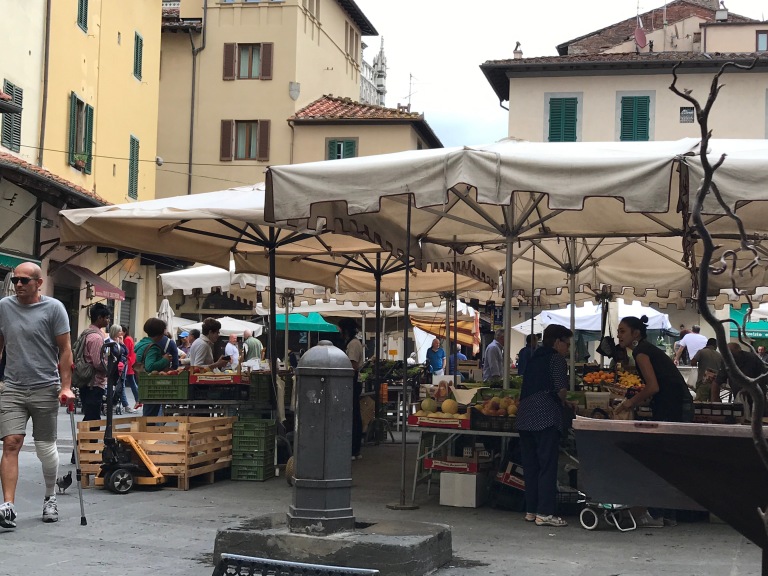 Most Pistoians don’t speak English, but they understand a lot, and they don’t mind helping tourists like me who get lost. And I get lost in Pistoia on a regular basis. I get onto a back alley and it’s easy to imagine I’m in a medieval city. Only some strung wires across the alleyways indicate I am in the 21st century.

The ancient walls around Pistoia are still much in evidence, though the four gateways have been removed to allow traffic to flow better.

Archeologists say that Pistoia has been inhabited since 200 B.C. But those remains are underground. The old part of the city dates from the 1200s, and most of the buildings have been recycled and are still in use.

Italians are great recyclers of buildings. In Pistoia, The Caffe Duomo is a delightful place to have an afternoon espresso, but it used to be a church called Santa Maria Cavaliera. The owner took me into the back storage rooms to see the ancient columns and well. I asked him why there needed to be another church right beside the Duomo, and he shrugged. “Pistoia has too many churches!” I read it had 115 churches.

There is an enormous building on Via di Stracceria (Street of Rags) where the restaurant Locanda del Capitano del Popolo is now located. It was built in the 1300s for the Capitano, the city official of Pistoia. Later it was turned into a bank. By the 1800s, it had passed into the Vannucci family, who had a business selling fabrics and dry goods. This store provided a livelihood for six generations until a few years ago when they sold the building and now a popular restaurant occupies the space. I’d be interested to see its evolution in the next 100 years.

This old building on Via di Stracceria has a secret passageway that not very many people know about. The Vannucci’s, the former owners of the building, are friends of my family, and they showed it to me, and it’s such a fascinating and dreadful story that I have to tell you. Next time.